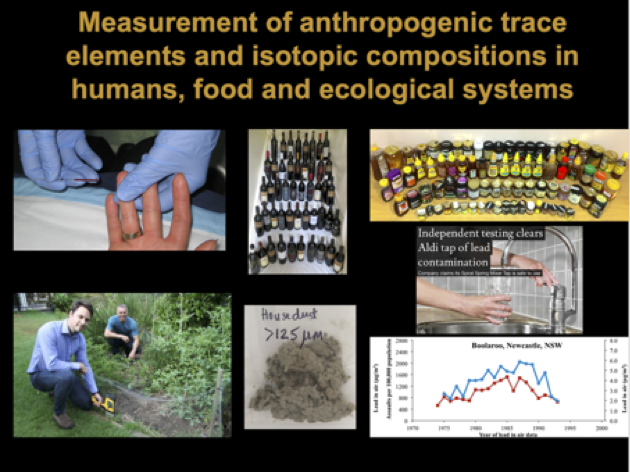 résumé : Over the past 40 years Pb and other metal poisoning from mining, smelting and industrial emissions has been dramatically lowered with major problems being shifted to industrializing nations. Entirely preventable disease from Pb exposure continues to affect millions of people, primarily in developing nations, who are already economically and socially disadvantaged.

Surprisingly to some, the major Australian rural communities of Broken Hill, Mount Isa and Port Pirie remain at a significant risk of exposure from lead mining and smelting. In these towns, ~50% of young children have blood Pb levels > 5 µg/dL (50 ppb).

Lead emissions (dominated by petrol consumption) elsewhere in Australia have largely been eliminated and its adverse health effects diminished. However, Pb remains a persistent contaminant in the environment from its seven-decade period of use between 1932 and 2002.

This talk will trace the odyssey of environmental lead contamination in Australia and examine using various matrices (e.g. air, blood, bees and honey, dust and wildfire ash), the sources, prevalence and impact of environmental lead. The presentation will cover our VegeSafe garden soil and DustSafe household dust programs that engage with the community to help them risk-manage their ‘human level’ exposures. In discussing our citizen science activities, we hope to stimulate interest from fellow scientists in New Caledonia to take up similar initiatives with a focus on locally-relevant contaminants such as Cr and Ni.

bio : Mark Patrick Taylor is a Professor of Environmental Science at Macquarie University, Sydney, specialising in environmental contamination and the risks is can pose to human health.

His research program investigates environmental contamination in aerosols, dusts, sediments, soil and water and risks to human health. His work focuses on impacts from mining and smelting emissions and depositions, and contamination in non-mining locations. In recent years he has examined lead and other contaminants in bees, sparrows, lichens, wildfire ash. His work has also encompassed ‘human environments’ and has included analysis of blood lead levels in children, lead in wine, honey, residential veggie patches, household dusts, drinking water and the effect of early life lead exposure on aggressive crime rates in Australia.

He recently completed a 15 month review of the NSW EPA’s management of contaminated sites for the NSW Minister for the Environment, which focussed on perfluorinated (PFAS) chemical exposures and its management. In addition, he is a science advisor to the following: the Gundjeihmi Aboriginal Corporation who represent the Mirrar people that are impacted by uranium mining in Kakadu, Northern Territory; the Metropolitan Fire Brigade (Melbourne), which includes his CI role in a clinical intervention trail for PFAS removal; Broken Hill Environmental Lead Program, which is addressing childhood lead exposures from mining operations.